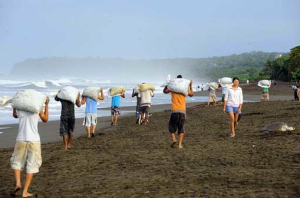 If you are fond of sea turtles (and who isn’t?), at some point during the past few years you’ve probably received an email forward with pictures of Costa Ricans carrying large bags full of hundreds of vulnerable olive ridley sea turtle eggs away from the beach, destined for human consumption.

This email is circulated to invoke alarm and discomfort among those that want to protect sea turtles.  But look a little closer. 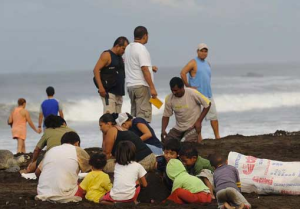 The collectors — men, women, children — are leisurely taking eggs (lots and lots of eggs), during broad daylight, without concern that others are snapping their picture.  Not usually the attitude of thieves.  This should provide some clues that perhaps its an organized, legal activity.  And that’s exactly what it is.

Regulated collection of a fraction of all olive ridley sea turtle eggs laid at Playa Ostional in Costa Rica is a clever conservation strategy.  Seem counterintuitive?  Let me explain.

First, there are two things you need to know.  One is that consuming sea turtle meat and eggs is a storied tradition in many cultures around the world.  Morera (2010) estimates residents of Ostional have eaten sea turtle eggs for over half a century.  Unregulated consumption in the 1960’s and 1970’s led to overexploitation and severe sea turtle population declines most everywhere, which then combined with other anthropogenic threats (e.g., incidental capture in fishing gear) to drive all sea turtle species worldwide to become endangered by the 1980’s.  Soon after, most countries made consuming sea turtle meat, eggs, and shells illegal.  Now, similarly to other banned goods, sea turtle products are illegally bought and sold on a black market for an elevated price, and poaching is widespread. 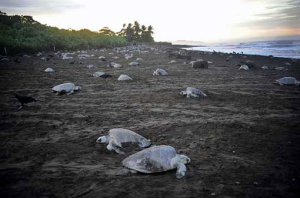 Another is that olive ridley sea turtles have a unique and poorly understood synchronized mass nesting strategy, in addition to solitary nesting like other sea turtle species.  Mass nesting events, or “arribadas,” occur about once a month during the nesting season on just a handful of beaches around the world, and Playa Ostional is the 2nd largest of those.  During an arribada, 100’s to 100,000’s of female turtles nest on the same beach each night for a 3-8 day period, each clutch containing around 100 eggs.  As you can imagine, lots and lots of eggs (sometimes millions) are deposited on the beach each night, which actually presents some unique problems.  After the first wave of nesters, clutches are continuously dug up and destroyed by subsequent nesters, and up to 50% of eggs can be lost this way (Cornelius et al. 1991).  Furthermore, lots of broken eggs result in the sand becoming extremely nutrient-rich, which can actually limit hatching success (Clusella-Trullas and Paladino 2007), not to mention attract predators and scavengers.  See where I’m going with this?  Lots of eggs are lost during arribadas anyway, so why not allow locals to harvest some of the eggs legally before they are destroyed?  So they don’t resort to collecting them illegally anyway.  This is why I previously called this a “clever” management strategy.  It seems to be a win-win situation for at least some arribada beaches: temper the black market by legalizing and regulating the collection of eggs that would otherwise be naturally destroyed.  It also serves as a source of income to the local economy, via selling eggs and ecotourism.  (If you’ve never seen a sea turtle nesting, put it on your to-do list!)

The above and additional reasoning has been the justification for this olive ridley sea turtle management strategy in Ostional — the one “revealed” in the alarming email chain — since 1987 (Campbell 1998; Valverde et al. 2012), re-approved in 2007.  The government-supported program is dedicated to 1) biological feasibility, and 2) organizing the community to both collect eggs and protect turtles.  Today at Ostional, commercial egg collection is allowed for the first two days of an arribada, and then another half day for local consumption.  This approach is akin to governing bodies allowing “sustainable” take (e.g., quotas) of fish, even endangered ones (like Atlantic bluefin tuna).  In return, egg collectors must keep the beach clean and reduce predation of eggs from feral predators, including humans after the 2.5-day legal harvest.

Regardless of whether or not you agree that humans should consume sea turtles at all, it is plain to see why this conservation approach is reasonable.

But is it effective?  Which is more important than reasonable and clever.

Remember, one of the stipulations of the program is that it is biologically feasible, meaning it should not negatively affect the sea turtle population.  So, does it?

Unfortunately there is little empirical data to help answer that question, but we do know that numbers of nesting females at Ostional have been decreasing for the past two decades.  Yes, I said decreasing.  Recent research by Valverde et al. (2012) suggests that currently, eggs may be taken from Ostional at levels higher than the population can withstand.  But they do not believe the history of legal egg collection is to blame for current poor hatching success.  Other factors such as beach erosion, environmental variability (watch: El Niño), and decreased foraging success of adults are likely the culprits.  In their study, Valverde and colleagues (2012) remind resource managers (yes, sea turtles are a natural resource) that harvest levels at Ostional should be set based on several population estimates including hatching rates, clutch destruction rates, and knowledge of how many hatchlings survive to become reproductive adults (which takes approximately 13 years or more for olive ridleys!).  If we take too many eggs now, it could hinder the population for years to come.

So the organized and legal egg collection at Ostional is a reasonable and clever management strategy, but the jury is still out regarding its sustainability.  If its not sustainable, its not effective.  A short-term solution would be to reduce collection levels until we know more about arribadas and this olive ridley sea turtle population in particular.  Bets on how popular cutbacks would be with the local community?

This reduction may actually be happening, but not for reasons you might think.

Tragically, a young and passionate sea turtle conservationist, Jairo Mora, was brutally murdered on May 31st while patrolling Playa Moín in Limón, Costa Rica for nesting endangered leatherback sea turtles.  Recently, murder suspects were arrested but convictions have not yet been made.  Although there is some debate about the motive (poaching, violent gang, drugs, revenge), the senseless murder caused an international wave of awareness of the dangers of the black market, as well as campaigns to honor Mora and discourage the consumption of sea turtle eggs.  The aftershocks of horror and sadness were felt around the globe, and Playa Ostional was no exception.  Locals report a 50% decrease in legal egg sales following the new international and local campaigns.

That was a lot of information.  Let’s take a minute to re-calibrate.  While the sustainability of the current legal harvest levels at Ostional are in question, the community buy-in is not.  One thing that can be learned from the devastation of losing conservation hero Mora and the disturbing situation at Playa Moín is that we can’t undervalue buy-in.  I don’t know how to end the black market or prevent poaching for good, but I do know that Ostional has made substantial strides to balance the protection of sea turtles *and humans*, and human consumption of sea turtle eggs.  This is a conservation success story in progress, and we should embrace it.

Pre-game pep talk: Buy-in > Sustainability > Clever solutions, and I think Ostional is on the right track to accomplish all three in the near future.  They’ve got a clever solution, they have worked hard for community buy-in, so let’s continue to nurture that, and hone in on the sustainability part.  Ready… break!

(I can’t help it, its football season.)

CAMPBELL, L.M. 1998. Use them or lose them? Conservation and the consumptive use of marine turtle eggs at Ostional, Costa Rica. Environmental Conservation 25:305–319.